At the extreme northern margins of the arctic tundra lives the Snowy Owl, the northernmost, heaviest, and most distinctively marked owl of North America. Largely diurnal, it spends much of its time perched still and silent on prominent lookouts, waiting to make forays for prey. 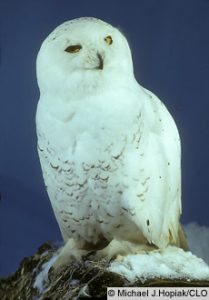 The Snowy owl is a spectacular bird which lives in extreme conditions. Its distribution is mostly above 60 ºN, which is highly Arctic. There it inhabits Arctic tundra, hummocks. When there is a lack of food the Snowy owl moves down to the southern parts of the worlds. It was spotted down in Greenland, India and in Bermuda as well.

Nyctea scandica measures about 60 cm (24 inches) in length with a wingspan over 140 cm (5.5 ft). The females are slightly larger. Males weigh approximately 1.2-2.6 kg (2.6-5.6 lb) whereas females 1.5-3.0 kg (3.3-6.5 lb). The Snowy owl looks just like from the fairy tale. Its feathers are snow white. Its head is purely white with big eyes and the body has got white feathers with dark spots over it. Up in the North this remarkable mammal must spend over 3 months in total darkness while the air is extremely cold. Thank to its dense feathers it will survive even in such extreme conditions.

Its diet mainly consists of voles, lemmings, fish, birds, hares and other small-medium sized mammals. Despite this variety its main diet is lemmings. It is able to kill and eat 10 lemmings per day, each weighing up to 140 g (5 oz) and measuring over 17 cm (7 inches) in length! However the lemming population differs from year to year reaching its peak every 4-5 years.

The breeding is highly dependent on the lemming population. When there is an abundant number of lemmings it lays over 25 eggs but on the other hand if there is an insufficient number of its primary diet it lays only few eggs. In some cases they move down to South where there are more hostile conditions. Eggs are laid in the nests situated on the rocks or on the ground. The incubation time is about a month. The longevity is up to 10 years. 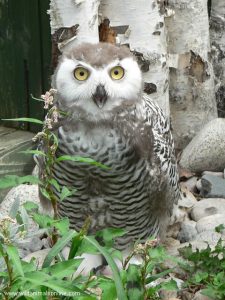 Read the Young Adult book, The Edge of Winter by Luanne Rice. A fictional story of two high school students trying to save an injured Snowy Owl and the natural beach where it was found.