Well the ground hog saw his shadow. I suppose that there will be 6 more weeks of winter. But Spring does come on March 21 any way.

This morning on my walk with Cooper, there were tiny tracks in the snow. Much smaller than the usual rabbit tracks, or Tom’s tracks. They were definitely some sort of rodent, possibly a mouse or small rat from the creek bottoms. A bit early for them to be out.

It is now snowing daily. Sometimes there is a dusting to several inches of cover. This morning was a beautiful sight. The sun was coming up, it was about 7:00 am, and snow was falling slowly and quietly. In the sunlight it was like being in a snow globe. Very pretty.

What a beautiful week we just had. It was winter break (February 20 – 25). The weather went from sunny and 6o plus degrees down to snowy and in the twenties. We had a thunderstorm on Saturday with the creeks and rivers cresting from the meltdown of ground snow and the torrential rains. On Saturday alone, February 25, it was 65 though noon and we had snow and in the twenties at night.

Today is a beautiful morning, 27 degrees, clear and the sun was out blazing  7:30 morning walk. Cooper and I had a nice walk. While walking, I had noticed that the Snow Drops were peaking out through the dusting of snow on the frozen ground. I love seeing those. It is like them saying, “don’t worry….Spring is on the way”. Even though NOAA is calling for rain and snow tonight, but then again 60 degrees by Wednesday with thunderstorms and down to 27 by Friday with more snow….Gotta love Central New York. It certainly is a weather roller coaster. 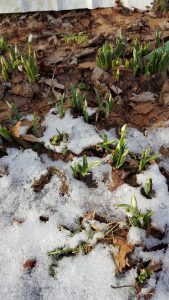