January can be the coldest and hardest month for animals and plants. What happens to animals in the winter? Many remain active, but many find a warm shelter and sleep away the cold months. If there is snow, it acts as insulation and keeps the ground underneath warmer than the air above. In regions where it gets very cold, the  ground freezes down to a varied depth called the Frost Line. Some animals can survive in the frozen soil. But many must dig down below the frost line so that their bodies will not freeze. If an animal goes into a deep, deep sleep that its heartbeat and its breathing slow down and its body temperature drops, this is called Hibernation. Hibernating animals live off their own stored energy and do not wake until spring.

Some hibernating animals include:

Wood frogs – hibernate under stone, logs, or dried leaves. They are cold-blooded animals who can survive partially frozen.

Groundhogs – hibernate the whole winter in burrows that they dug into the ground in early fall.

Chipmunks – hibernate lightly, they occasionally will wake to eat stored food or to poke above ground on warm days. 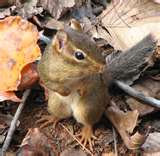 Moths – the pupa lies resting within their cocoon, which the caterpillar spun around itself at the end of summer before changing into a pupa.

Salamanders – curl up under leaf piles, logs, or stone walls and become inactive.

Bees – out of the entire summer colony, only the queen survives through out the winter hibernating in a hole under leaves. Since bees are cold-blooded animals, they can survive partially frozen.

Earthworms – hibernate three to six feet below the soil’s surface where they cannot freeze.

During the cold months, those animals that do not die, sleep or leave for a warmer climate must remain active. Animals that stay active put on extra lyers of fat and grow thicker coats. Generally they sleep during the day and go out hunting for food at night. Winter is a good time to learn which animals stay active in your neighborhood.  You can often find their tracks in the snow or mud.

It is mating season for raccoons, fox, owls, and gray squirrels. These are some of the active animals during the winter months.

By the end of January we will have 50 minutes more daylight than we had at the end of December!