The Eastern coyote looks like a medium-sized German shepherd dog, with long thick fur. The tail is full and bushy, usually carried pointing down. Ears are erect and pointed.

It’s length can be four to five feet including its tail and can weight thirty five to forty five pounds with the males usually larger than the females. The coyote’s color is variable, from blonde or reddish blonde to dark tan washed with black. Legs, ears and cheeks usually reddish.

The Eastern coyote, commonly believed to live only in the wild parts of the eastern coast, readily adapts to living close to people. Coyotes now range form Maine to South Carolina. They have been sighted in parts of New York City, and are common in the suburbs north of the City. They have also become very common in parts of the New Jersey shore, where we had a farm and lost many chickens to coyotes. As unlikely as it may seem, human development makes surprisingly good coyote habitat. The abundant coyote food supply (e.g., rabbits, squirrels, deer, cats, small dogs, garbage, and pet food) makes living close to people worthwhile. Even the feeding of wild birds with commercial wild bird seed will attract coyotes to your land.

What do Eastern coyotes eat? A coyote’s diet depends on one thing – what is easiest to find or catch and kill. During the summer, coyotes will feed heavily upon berries, insects, and rodents. In agricultural areas, sheep and goats. During early fall they rely on abundant grasshoppers. Small mammals become the prey of choice during late fall and winter. As winter becomes harder and small mammal populations decline, coyotes turn toward their largest prey – whitetail deer. Deer killed by vehicles and other causes (carrion) can be an important food source for coyotes. Lacking any carrion, coyotes can, will, and do kill healthy adult deer. Coyotes in the spring time can have an impact on fawn survival in localized areas.

How many coyotes live in New York state alone? After hearing a family group of coyotes howl, as we have heard many times during in the evening on our undeveloped property where we enjoy a picnic once in a while, it is easy to get the impression that the woods must be overflowing with coyotes. In reality there were probably five or six. A few coyotes make a tremendous amount of noise when they want to. The eastern coyote does not form a true ‘pack’ with multiple adults living together like their relative the wolf. Instead they are organized as a ‘family unit’. Each family unit is made up of the adult pair and their pups from the current year. A family unit will defend a territory of 6 to 15 square miles against other coyotes. It is the territorial behavior of coyotes that limits their numbers in any one area. The coyote population in New York State during the Summer is approximately 20,000-30,000. Young of the year coyotes are driven from their parents’ territory between September and March. These young coyotes travel up to one hundred miles in search of a vacant territory to claim as their own.

How did coyotes arrive in the east? There are two theories to explain the presence of Eastern coyotes in New York. The first theory is that coyotes were here before Europeans settled North America. The clearing of the forest for farms and homes forced coyotes to retreat to unsettled areas of the northeast, e.g., the Adirondack mountains. The return of the forest during this century coincided with the return of the coyote.

The second, and more widely accepted theory, is that the Eastern coyote is a relatively new species in New York. This theory suggests that western coyotes extended their range eastward, eventually forming a distinct subspecies.

Whichever theory is true, coyotes have been present in New York at least since the 1930’s, and firmly established themselves by the 1970’s. They are here to stay.

The large canine which resides in New York is a true species; they are not a hybrid. The proper name is the Eastern Coyote, Canis latrans. Coyotes and dogs theoretically can interbreed to produce what is called a ‘coydog’. However, these crossbreeds have a reproductive cycle of dogs, not coyotes, and will give birth at times of the year when the pups cannot possibly survive (i.e., January). In addition, there are behavioral differences between dogs and coyotes which prevent crossbreeding from occurring. Coyotes want to mate with other coyotes and not with dogs. Coyotes are actually more likely to prey upon a domestic dog instead of mating with it. Experts say it is in this manner that dog genes are prevented from entering the gene pool of true coyotes, maintaining the two separate species. Coydogs occurred at the leading edge of coyote range expansion during the 1950 to early 1970’s. The occurrence of a coydog would be an extremely rare event in New York today since there are abundant coyotes in the area.

For the record, Coyotes very rarely bite people, and when they do it’s usually because they’ve been induced into feeding from the hand. Yes, they raid garbage cans and gardens and have been known to kill cats and small dogs, but overall they’re not a negative addition to the landscape. The best strategy for dealing with them is to fence off sensitive areas and keep pets inside at night, when Coyotes are the most active.

In 1992 we adopted a Coydog from a local humane society shelter near our home at  the New Jersey shore. The pup was found in the New Jersey Pine Barrens. We raised this pup until her death of old age at 14 years 10 months old, just two months shy of her supposed 15th birthday. She was truly a family member and loved our children, as they did love her. We named her Ashley, as the color of her hair was of ashes when we adopted her at  approximately 8 weeks old. She truly had Coyote markings, as I had mistaken a coyote on our land for her. She proved her coyote spirit when she several times caught an occasional mouse in the house and proudly placed it upon her pillow……we miss her terribly…. 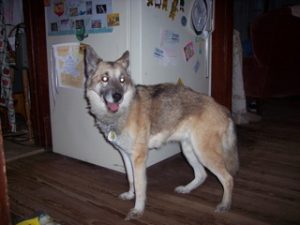 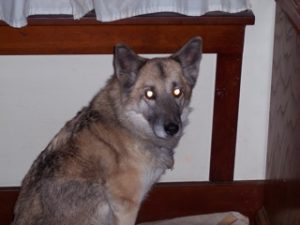 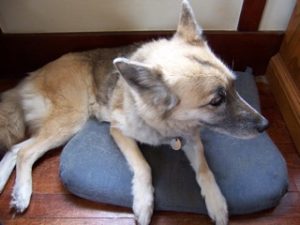 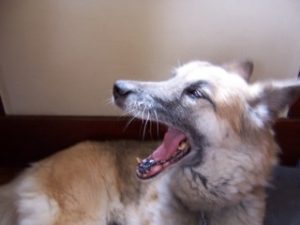