These are birds who hunt for their food primarily while they are flying, using their keen senses, especially their vision. What you can see from fifty feet away a Bird of Prey can see from one hundred and fifty feet away. Birds of Prey have sharp vision, in some cases better than humans. They can see fine detail as far away as a mile. A Bird of Prey’s eyes cannot move or roll in their sockets like human eyes can. Instead, their necks are more flexible, allowing them to see in every direction, including behind them.
Hawks, falcons and eagles have a boney shield, called a sapraorbital ridge, over their eyes. This ridge has the same function as a baseball cap, it protects the bird’s eyes from the sun. 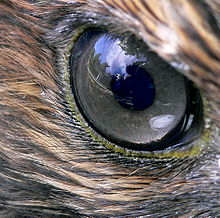 All Birds of Prey have strong curved beaks for tearing apart their prey. They generally prey on vertebrates, which are usually quite large in comparison to the size of the bird. Most also eat carrion (the carcass of a dead animal) at least occasionally and the vultures and condors eat carrion as their main food source.

All Birds of Prey can hear, but owls have the best hearing. Their ears are positioned in a way that allows them to pinpoint the exact distance and direction of their prey. The owl’s flattened face captures sound waves, like a satellite dish does. On dark moonless nights, and owl can locate its prey just by sound alone.

Some birds of prey are: eagles, ospreys, hawks, falcons and owls….. 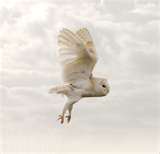 In early Spring the Birds of Prey can be spotted soaring overhead by the thousands for a few weeks, heading north for their summer homes. See if you can spot some of these wing silhouettes and record what you saw in your Nature Study Journal…. 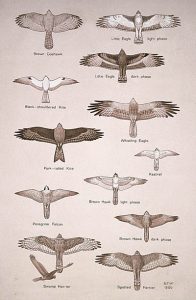 The term “raptor” which is sometimes used to name Birds of Prey in general, is derived from the Latin word rapere (meaning to seize or take by force) and refers informally to all birds of prey. Because of their predatory lifestyle, they are at the top of the food chain, they face distinct conservation concerns.