I have noticed that the wild Canadian Geese disappear from our area by late November or early  December. They are now slowly returning to the streams, ponds and lakes. I enjoy the geese. Some say they are a bother, but I like to see them.

On my Nature Journey so far in March of 2010, I have observed many foot prints in the snow. Mainly rabbit and sparrow. There have also been prints so far I am recognizing as possibly raccoon. Other prints I have seen are some kind of small rodent. I can tell since I see a tail dragging behind 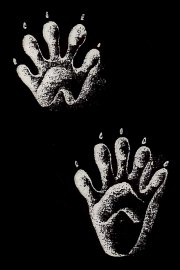 Raccoon prints in the snow

The dairy farmers here where I live are abundant. In early April, they come out to the fields on their tractors with manure wagons attached. The spreading of cow manure attracts the wild turkey, which are more abundant than the dairy farmers here, and you can see them everywhere! It is very common to see large flocks in the corn fields. Early this month I had the opportunity  of seeing several Tom Turkeys with their tail plumage outspread. What a spectacular sight! I immediately drew it in my Nature Journal!