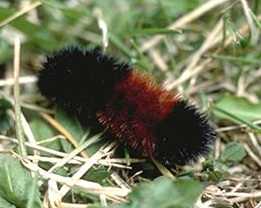 The Wooly Bear turns into a Isia Isabella moth. 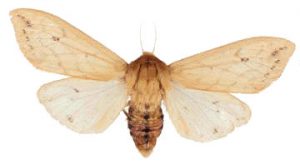 The banded woolly bear larva emerges from the egg in the fall and overwinters in its caterpillar form. It survives winter freezes by producing a cryptoprotant in its tissues. Once the weather warms, the larva devours all the grass and weeds it can, pupates, and becomes an adult, which then lives through the summer.

Larvae produced in the same clutch of eggs can vary from mostly red to mostly black, even when reared under the same conditions. The orange band will grow towards the ends of the body, with the black bands decreasing in size, as the larva matures.

The coloration may also show how near being an adult the caterpillar is. At full growth, fall weather signals the wooly caterpillar to seek shelter, as ladybugs do.