February is a good month to study your local birds. Depending on where you live, certain species of birds will remain year round, others will leave when fall comes, and some will move in from farther northern  areas for winter. To get to know your local birds, put out food to see what birds you can attract near you. Use a bird field guide and binoculars to help in identifying them. Be sure to draw them in your Nature Journal.

You will notice that the sun rises earlier and sets later, than earlier this winter, and with the sun’s path higher in the sky, daylight seems brighter than a  month ago.

On a sunny day, sparrows, finches, cardinals and starlings can be heard singing.
Owls and skunks are mating and repairing nests or dens for their young.

The February full moon has is called the Snow Moon by Native American tribes. February is the snowiest month in northern regions.

February 2 is Groundhog Day. The tradition of predicting the end of winter on February 2 comes from England and Germany where it was a badger that did the predicting. In the United States, in a small town called Punxsutawney, Pennsylvania, the official groundhog named Punxsutawney Pete, does the predicting.
It is said that if Punxsutawney Pete comes out of his burrow and sees his shadow on February 2, he will go back to sleep and there will be 6 more weeks of winter. If the day is cloudy and he  doesn’t see his shadow he will stay out and spring will come sooner. Do you know what he did this year? 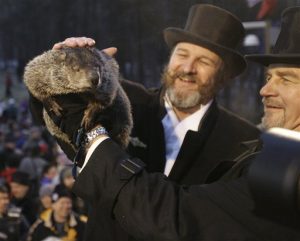 This month, for us humans, is that heart felt holiday Valentine’s Day.

And it’s not just we humans— animals in the wild are also caught by Cupid’s arrows.

Take a a walk through your backyard or a back country hike and you’ll likely be confronted by a courtship ritual of some sort. For the animals engaged in such displays will be through the whole month of February, not just Valentine’s Day.

Even though it is still winter, mid-winter and cold in much of North America, Raccoons, Minks, River Otters, Gray and Red Foxes, Coyotes, and Skunks all take time off from their winter hunting to prowl for partners. Groundhogs peak out of their winter dens and start to look around, longingly, after they emerge from their long winter’s sleep, and many of their rodent kin, from California Kangaroo Rats to Black-tailed Prairie Dogs, also consider February just the right time for rubbing noses.

Birds, too, at least a few of them, hit their romantic stride during February. Great Horned Owls start hooting it up in December but mostly wait till now to take care of their romantic business. Male Red-winged Blackbirds return to much of the continent in February and start right in displaying and singing for prospective females, while American Woodcocks stage their delightfully bizarre courtship performances in the February twilight. And in the swamps of southern Florida, ungainly looking Wood Storks make hay in the February sunshine.