Tracks in the snow

One of the things I love about winter, is when I go out in the morning to care for my animals, I love looking at the fresh tracks in the snow. Here is seems that we have fresh snow every morning from January to March. Even just a dusting of fresh snow will give you some indication of what happened during the nighttime hours.

Yesterday morning, when I went outside, I came across new tracks that I had not ever noticed before.  The animals tracks that I  usually see in the mornings are , deer, rabbit, mice and occasionally a stray cat. This particular morning I came across a set of prints that had 5 toes. This is what caught my attention.

The snow was just the right consistency to hold the shape of the track. I was able to really notice the detail. They tracks came from a field behind our back yard, which slopes down a slight hill into out yard. They seemed to mix with rabbit tracks and they off to the north side of out yard and back up the hill on to the field again. It was the mixing with the rabbit tracks that put a bit of fear into my heart. I could tell that the rabbit was a meal for this particular animal with the 5 toes.

I came into the house after I was done with my chores and was tormented by the new type of animal tracks I had discovered. So, I went to my tracking chart and matched what I saw.

It was a Fisher.  The Fisher is a medium sized mammal, comparable to a domestic cat,  native to North America, in the mustelid family, commonly known as the weasel family. Their bodies are long, thin and low to the ground. They are common to the coniferous forests of Canada and northern parts of North America. The Fisher are related to but larger than  the American Marten. It is also sometimes referred to as a Fisher Cat but it is not feline. 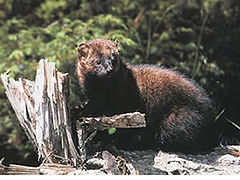 Fishers have few predators aside from man. They have been trapped since the 18th century for their fur. They are omnivorous and feed on a variety of  small animals. They eat fruits and mushrooms but prefer rabbit. Which is why when I saw the mix of Fisher and Rabbit tracks it gave me a terrible feeling. Fishers avoid human contact. There are reports of them attacking pets and only one instance in 2009 where one attacked a 6 year old boy in Rhode Island.