On behalf of Ground Hog Day I reprinted this article from enature.com …..as of yet I am not sure if he has seen his shadow today or not….

How Can Groundhogs Predict The End Of Winter?

Unlike many rodents, groundhogs are true hibernators and are rarely, if ever, active or seen during the winter. They often build a separate “winter burrow”, which extends below the frost line and stays at a steady temperature year round, allowing the animal to avoid freezing during the winter’s cold months.

It’s this trait of sleeping through the winter that led to the folklore that a groundhog’s behavior can predict when winter will end.

Since a groundhog sleeps through the entire winter, the reasoning is that the winter must be ending if he’s willing to stay out and about once he or she has been awakened on February 2nd.

It’s a pretty shaky premise and the poor creature is probably so dazed from being rudely awakened that he has no idea what the temperature is.

Groundhogs are among our longest hibernators, often settling down as early as October and remaining in their burrow until March or April.

So no matter what our furry prognosticators may appear to tell us on Groundhog Day, it’s a pretty safe bet that just want to go back to sleep, regardless of the weather!

What an amazingly warm winter this has been. There were several below zero nights, but on the average it has been warm! There has not been much snow, but then again this is February, our snowiest month. I have been able to water the animals for most of the winter so far using our outside spicket, which is normally off limits December, January, February and most of March. Some days I have even been able to use the garden hose!

This morning it is 19 degrees outside and I certainly won’t be able to use the spicket. So it is toting water from the kitchen sink in jugs for my animal friends. However  the temperature is predicted to climb to 40!

The 15th Great Backyard Bird Count starts this tomorrow! During February 17-20 people all across across North America are invited to participate in count birds returning to their area through an event sponsored by the Cornell Lab of Ornithology, the Audubon Society and the Canada bird Studies. Tens of thousands of bird watchers will be counting birds and submitting their checklists to www.birdcount.org.

What happens is that you watch birds for at least 15 minutes at any location and tally the highest number of each bird species you see at any one time. Submit a new checklist for each day and each new location where you count.

Fill your bird feeders if you plan to count birds at your feeders.

Charge up your camera batteries so you can capture that perfect picture for your Nature Study Journal.

If you’d like a preview of the birds you might see in your area, enter your zip or postal code on www.birdscource.org to get printable tally sheets.

In past counts, participants were most likely to report American Robins in areas without snow. Will more robins be seen farther north this year?

Will some birds, such as Eastern Phoebes and geese, begin their migrations earlier because of the warmer temperatures and lack of snow or ice in many parts of the country?

Fewer Blue Jays have been reported in the Northeast in recent months; will GBBC reports show the same trend?

Where will the Snowy Owls turn up next?

I am going to give this a shot this year and see what I come up with.

This morning watching out my back window I saw a most adorable sight. A wild rabbit joining the ducks and geese for breakfast. Normally, the resident rabbits will come and eat out of the feeding dishes after the birds are finished or before I let the birds out for the day.

A small bird I have been noticing lately are an abundance of Dark eyed Juncos. They enjoy the last few crumbs left in the feed dishes after everyone else is finished. Dark-eyed Juncos are neat, even flashy little sparrows that flit about forest floors the across the US and the western mountains of the US and parts of Canada in summer. They remain in the  most parts of North America for winter. They’re easy to recognize by their crisp (though extremely variable) markings and the bright white tail feathers they habitually flash in flight. One of the most abundant forest birds of North America, you’ll see juncos on woodland walks as well as in flocks at your feeders or on the ground beneath them. 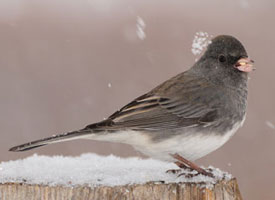