Most fawns are born with their fur covered with white spots, though in many species lose these spots by the end of their first winter. In the first twenty minutes of a fawn’s life, the fawn begins to take its first steps. Its mother licks it clean until it is almost free of scent, so predators will not find it. Even if they are twins or one of triplets, a newborn deer spends a lot of time alone. Yet it’s remarkably safe for such a feeble creature. That’s because a fawn is all but invisible to foes. A wolf or Bobcat can neither see the fawn nor smell it.

Minutes after its birth a fawn will climb to its feet and start suckling. It will be a week or so, however, before the fawn can keep up with its mother. So when a doe ventures off to feed, it leaves its offspring behind. And when there are twins or triplets, the doe keeps them in different places, which decreases the likelihood of them all being eaten.

But it takes a bit of luck to find a newborn fawn. With white spots on a reddish-brown coat, a fawn is indistinguishable from the sun-dappled forest floor where it waits for its mother. Also, a fawn is scentless — it has no discernible odor — for the first several days of its life. A predator would have to stumble upon the fawn just to know it’s there.

Its mother leaves often, and the fawn does not like to be left behind. Sometimes its mother must gently push it down with her foot.The fawn stays hidden in the grass for one week until it is strong enough to walk with its mother. The fawn and its mother stay together for about one year. A male usually never sees his mother again, but females sometimes come back with their own fawns and form small herds. 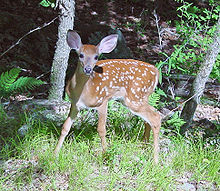