Animal baby names can be pretty amusing. We all know about colts, calves and eaglets—but even experienced naturalists sometimes can’t remember the names for certain species. The various and oftentimes bizarre names used to describe animal offspring are often stumpers to even the best Trivial Pursuit player.

A baby toad is called, appropriately enough, is called a Toadlet. On the other hand, a one-year-old male turkey is called a Jake.

A Jake turkey looks much like hens do, but are slimmer. In the winter, young of the year stay with their mothers in large flocks, roaming the winter woods in search of food. Adult males form gobbler flocks, and stay to themselves until spring, when mating season begins.

Baby mice are known as pinkies. They are born blind, deaf and completely hairless. Their fur begins to grow at five to seven days. Their eyes open at ten to fourteen days and they become extremely mobile. They also begin experimenting with solid foods at this time.

The babies (or caterpillars) of Giant Swallowtail butterflies and Regal Moths are known as Orange Dogs and Hickory Horned Devils. 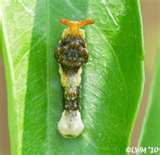 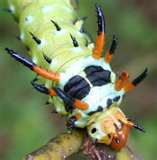 As for the Hag Moth, its’ name is no better in the larval stage, when it’s called a Monkey Slug.

Young Elephants seals are called Weaners. The seal pups are born in the Antarctic spring. Like many Antarctic seal pups, they stay with their mother increasing rapidly in weight while the mother gets progressively thinner. Eventually the mother has to feed and teach the pup, by which time the pup is quite large and well developed.

The pups are very dark at birth and have quite delicate flippers with long elegant nails that they scratch themselves with.  Elephant seal pups are like little old men, very precise and somewhat gnome-like, a stage that they grow out quite rapidly as they become teenagers (in elephant seal years that is).

Young cod are known as sprat, and young mackerel as blinkers. And while there are lots of calves, pups, and kits, only the louse gives birth to baby nits. 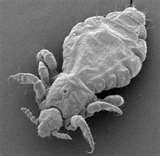